ormed 12 months ago by the Paynes.

After years of helping talented Brits realise their dreams by opening pathways to the States, they decided to form a base in the UK.

The goal was not just to compete, but to put a formidable youth programme together that would push for honours.

In one of the most highly anticipated local rivalries, Warwickshire Warriors put the league on notice early, when they handed league favourites Coventry Elite a 27-point drubbing fresh out the gate to start the season.

The run continued until they met an in-form Wolverhampton SLAM in November, who put a halt to this juggernaut of a team. Warriors lost by 11 and had some soul searching to do. The loss hurt and it would be motivation for the remainder of the season to suffer no more losses.

The Warriors stepped up the intensity and set their sights on the league championship. In their last game of the 2021-22 season, the Warriors faced their only victor, knowing a 12 point win would be their only chance to seal their fate.

It was put to bed in the final seconds of the game. Aided by stellar play at the guard positions, following a timeout with 10 seconds remaining, Aaron Atwal put his 18th and 19th points on the board to push the lead to 12 and secure the league win!

Coaches Roger and Bryce Payne said: “To see such a young group of guys gel in such a short time, throughout two years of disruptions, and win a league title in their first year is just phenomenal to us. We will be sending some of this unit to live out their dreams in the US this summer, so we will continue to develop and recruit for our 2022-23 season and look to repeat upon this success. For now… more hard work.” 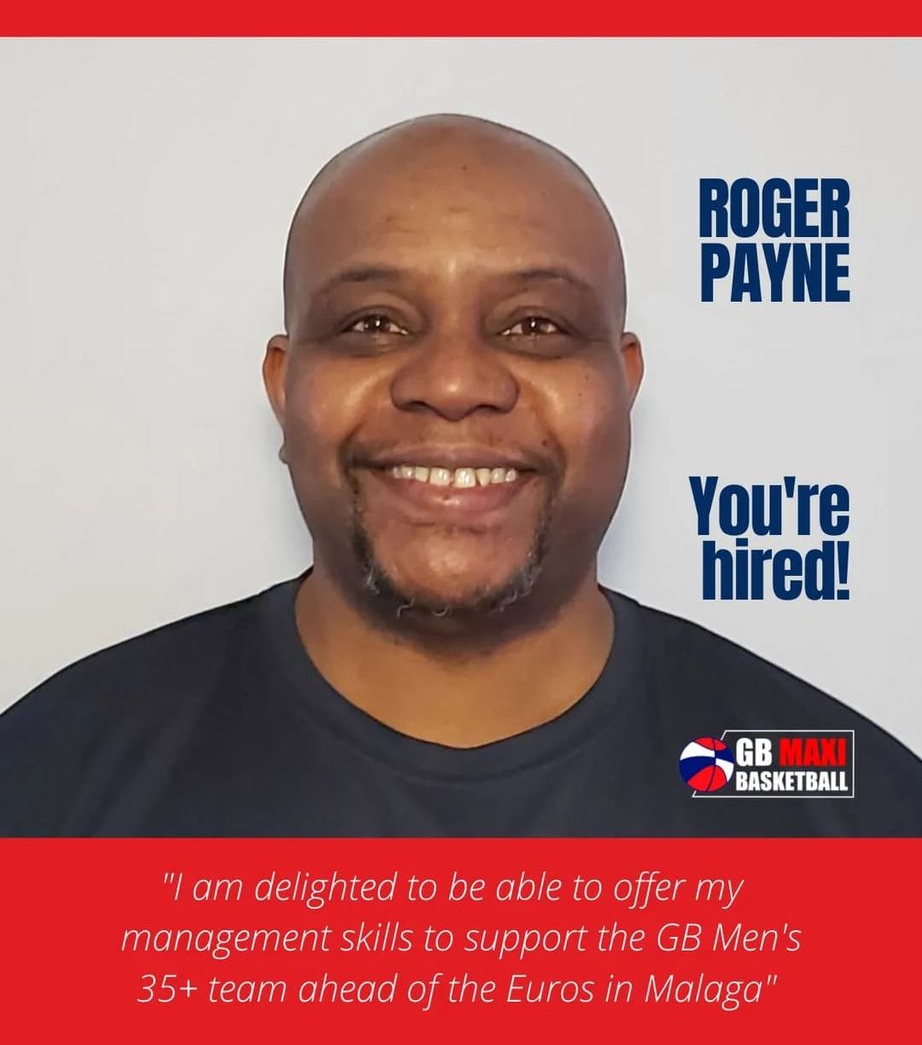 Roger Payne has been appointed as M35+ Team Manager.

Based in the Midlands, Roger is a Level 3 basketball coach, but has played three different sports for Coventry and the Midlands region (Basketball, Rugby and Athletics), making it to the Junior Olympic Athletics team.

Roger coached several National League programmes in the early 2000s, and was agent to more than 20 British Basketball League players from 2009-2014.

Over the past eight years, Roger has placed more than 40 youth players in schools on scholarships in the United States of America, and continues to do that year upon year through his organisation Ballers Heaven.

In the past 12 months alone he has opened doors for kids from Barbados, Spain, Sint Maarten and the UK.

Coach Porter at Layton Christian Academy said: “Thank you!!!!! Tyrese was the MVP of the tournament and Timmie was First Team All State! They represented you well my friend!!!!”

Tournament MVP Tyrese Lacey’s mother said: “The game last night was epic! Tyrese has had an amazing year since being given the opportunity by Coach Payne at Ballers Heaven, who opened the doors for Tyrese to be able to go to the States and fulfil his dream. I seriously can not describe into words how incredibly proud I am of Tyrese getting his first State Championship and to be named MVP of the tournament. I am the proudest mom in the world. The team played so well together and I am excited for the future and to see how much more Tyrese can achieve. Congratulations LCA.”

The parents of Timmie Olubisi are making these congratulations for a second year running as he won his second State Championship and First Team All State selection in Utah.

They said: “We are super proud of you son. Your basketball has really grown from strength to strength since arriving the states its really amazing to watch how your resilience and skills have developed – most of all winning two State Championships, back-to-back. Big shout out to Coach Porter at LCA for all his support. Also, shout out to Coach Bryce and Coach Payne of Ballers Heaven for exposing you to this opportunity. We are very proud of you Timmie, keep it up son.

Have a flick through for some amazing highlights of the Ballers Heaven alumni. There is more to come, including information on upcoming scouting tours, runs and our coverage of our UK Select Team entering The Great Western Classic. 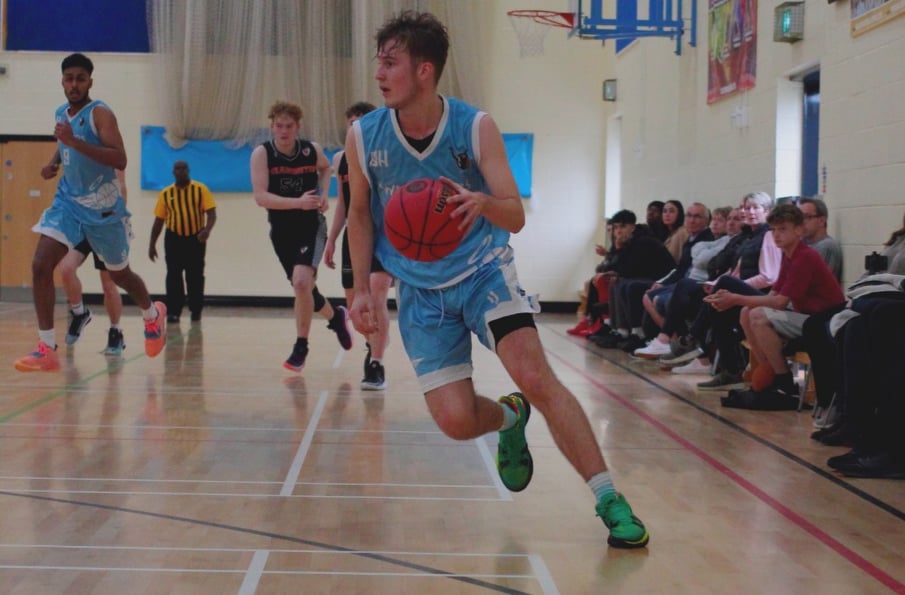 Ballers Heaven had an amazing week touring Utah to close out 2021, which saw them play against Layton Christian Academy.

The Ballers Heaven squad narrowly lost by 12 and gave a great account of themselves, also losing to RSL Academy, which is ranked 24 in the entire USA by 20.

The average age of Ballers Heaven players was just 15, so playing against a post-grad program showed great maturity and development.

The team was also invited to watch and learn from number 12-ranked BYU College powerhouse.

Head coach Roger Payne said: “What an honour and privilege to be able to learn from coach Mark Pope and his staff as we were able to witness some amazing coaching and some of tomorrow’s future star be pushed through their paces.” 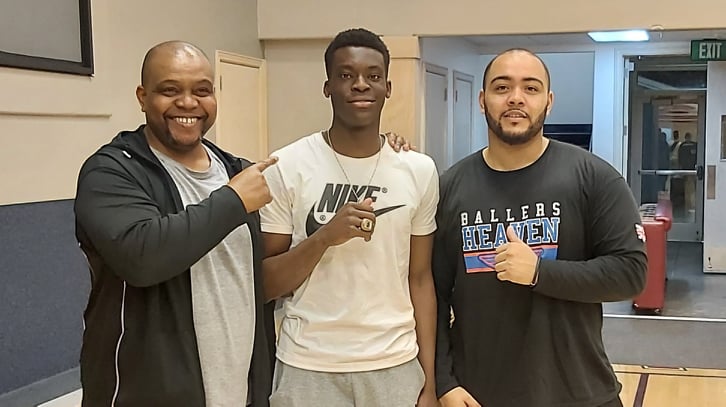 Ballers Heaven reconnected with champion alumnus on tour of Utah

During a tour of Utah, Ballers Heaven met with alumnus Timmy Olubisi, who showed off the championship ring he won with Layton Christian Academy last season.

Timmy and his brother Tommy played for LCA when the team won the State 2A Boys Championship, and he met with Roger and Bryce Payne from the programme that helped him reach the United States.

He inspired the next generation of Ballers Heaven athletes, who were present taking part in training and games around Utah. 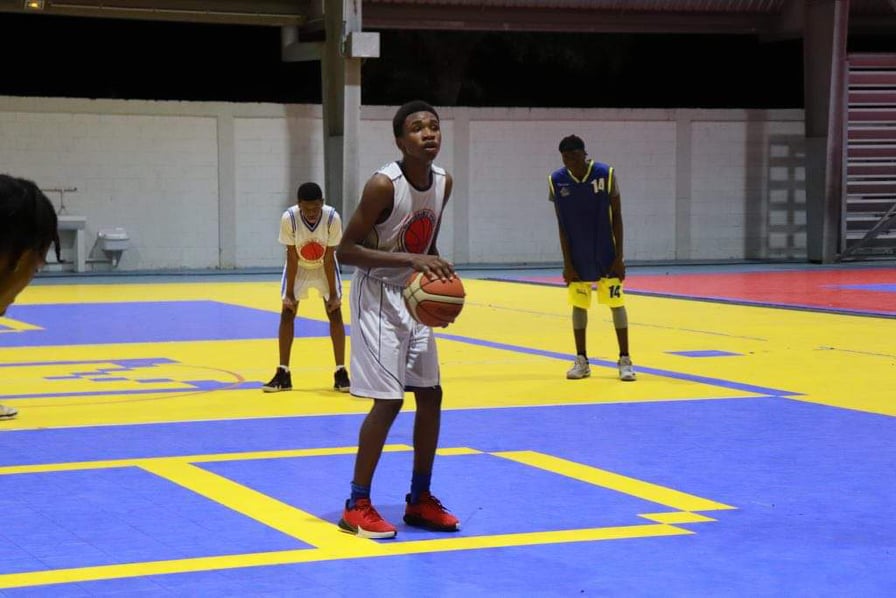 Meet Ian Dangleben York, a two-way guard that takes pride in playing defence and can heat it up from behind the three-point line with regularity. He will be joining Layton Christian Academy this year.

Ian is a product of Ballers Heaven partners in Sint Maarten in the Caribbean. He is an electric player that is blessed with amazing balance and speed.

Ballers Heaven owner and Coach Roger Payne said: “Omar Beauperthuy, who is a partner and former player with Ballers Heaven, has done an amazing job setting up the Academy in Sint Maarten and is developing some hungry talented young players.”

Ian is sure to be a great asset to coach Bobby Porter as he is set to arrive at LCA the 15th August 2021.

6’2 Power Forward Caiyesha Bailey from Aston Manor is set to follow in the footsteps of her brother Kemari Bailey, who gained a full ride scholarship to Idaho NCAA Division 1 college.

Ballers Heaven made another lifetime dream come true for Caiyesha, who is set to leave for the United States of America in August 2021.

Over the last few months Caiyesha has worked diligently with Coach Zavier and Coach Payne of Ballers Heaven as they prepare her for the opportunity.

Caiyesha said: “I still can’t believe I’m off to the States. I can’t thank you enough for making this happen for me and given myself the opportunity to follow in my brother Kemari’s footsteps.” 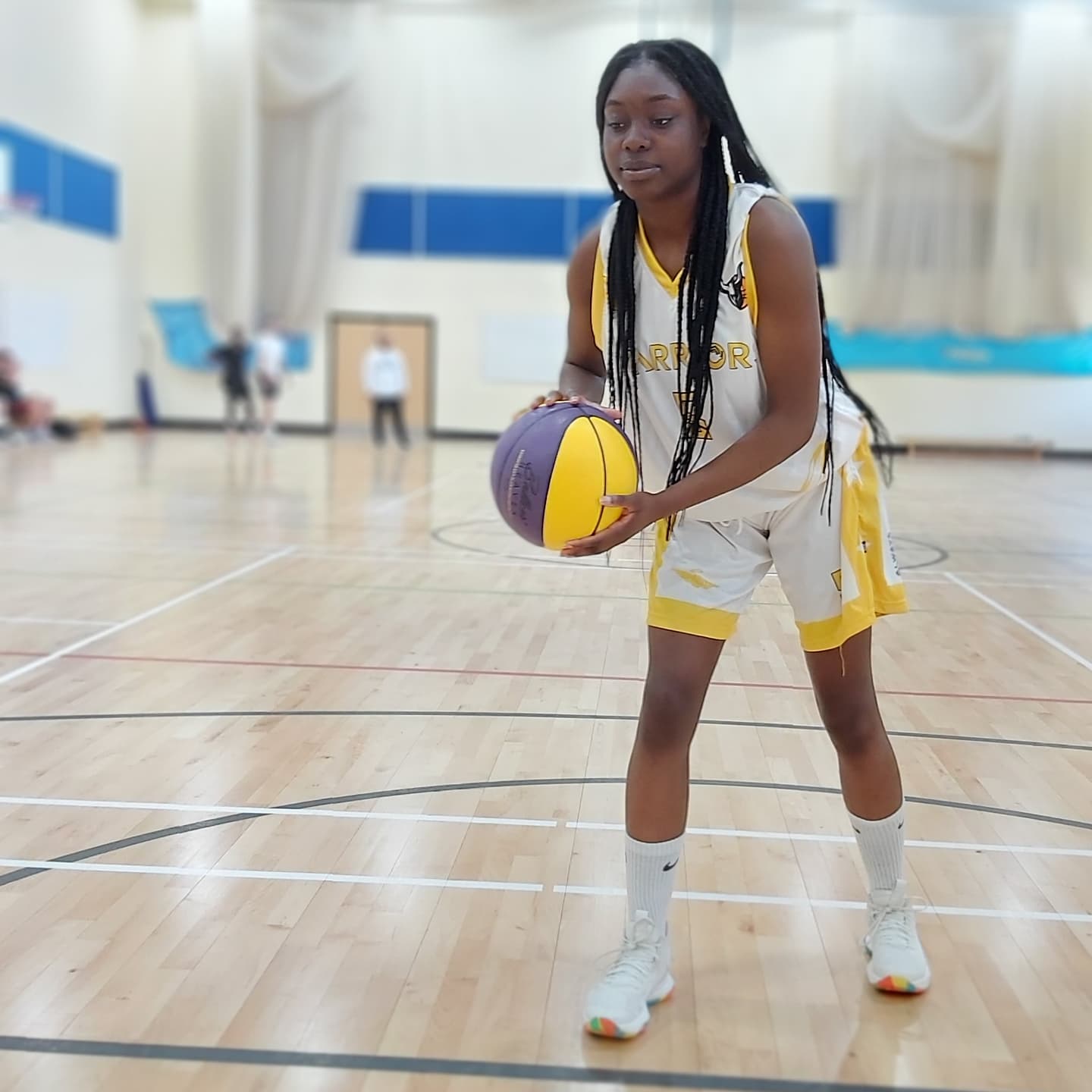 Congratulations to our female standout guard as she embarks on her amazing journey from Spain to the United States.

Ballers Heaven female phenom Grace Edogiawerie is set to take her talents to the States. It’s well deserved and couldn’t happen to a more humble person.

We at Ballers Heaven are super proud of you as you embark on this amazing new chapter of your life. Stay on your grind, give it your all and you could be the next female star.

Layton Christian here she comes. Grace will be leaving on 14 August 2021 and will be sorely missed. 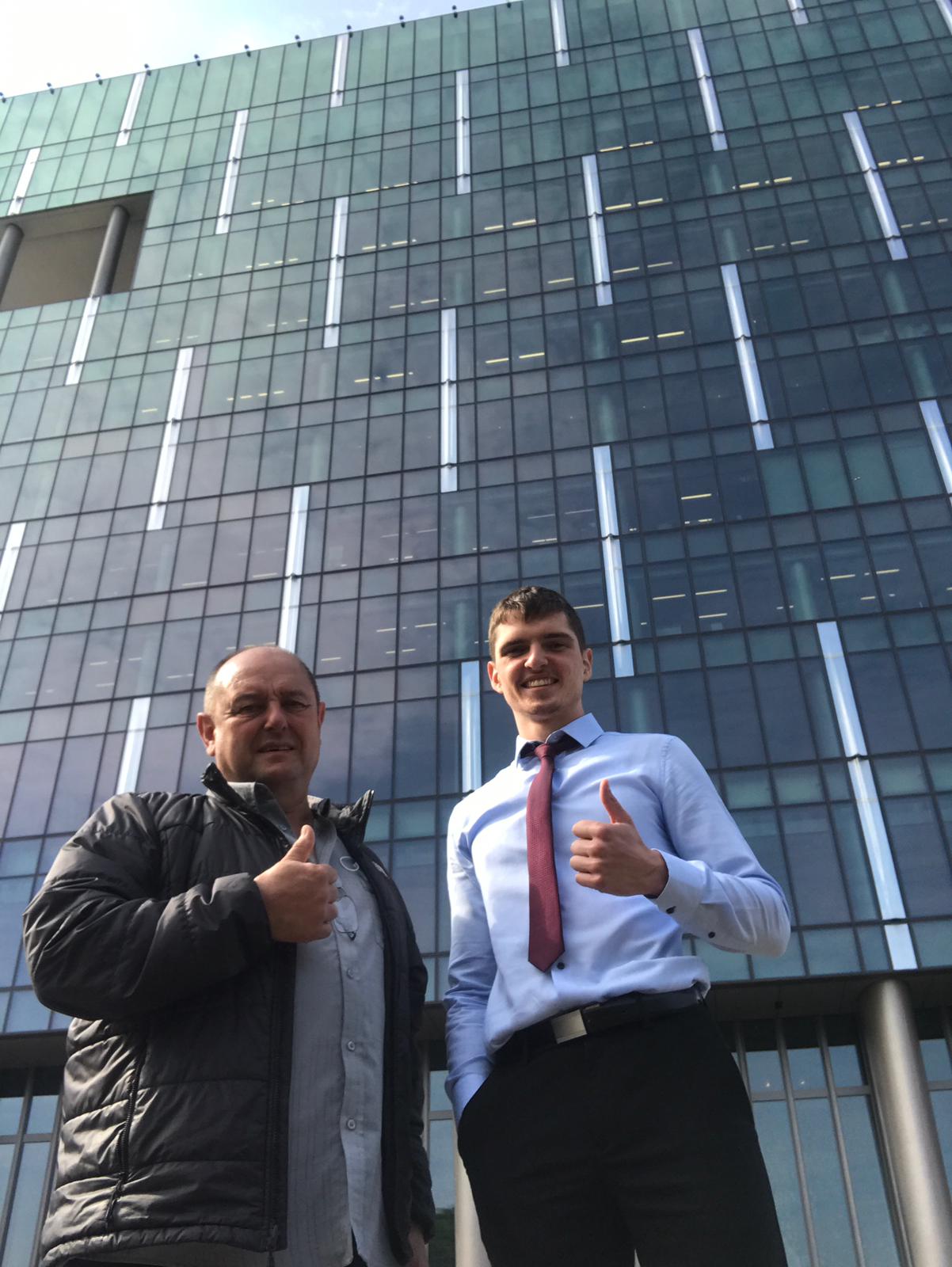 “Work in silence and let success be your noise” is a phrase you will hear from Ballers Heaven coach Roger Payne, and it rings true when it comes to Kurtis Dearn

“Work in silence and let success be your noise” is a phrase you will hear from Ballers Heaven coach Roger Payne, and it rings true when it comes to Kurtis Dearn.

Kurtis is a dynamic scorer and has unlimited range that will no doubt hold him a good stead as he embarks on a scholarship in Utah.

Shooting guard Kurtis will leave for the USA on 14 August 2021 where, he will be coached  by the experienced watchful eye of coach Mark Burton.

Kurtis will be a post-grad in Utah. He is a great young athletic player that can hit from range consistently.

We at Ballers Heaven expect great things from Kurtis and wish him every success. 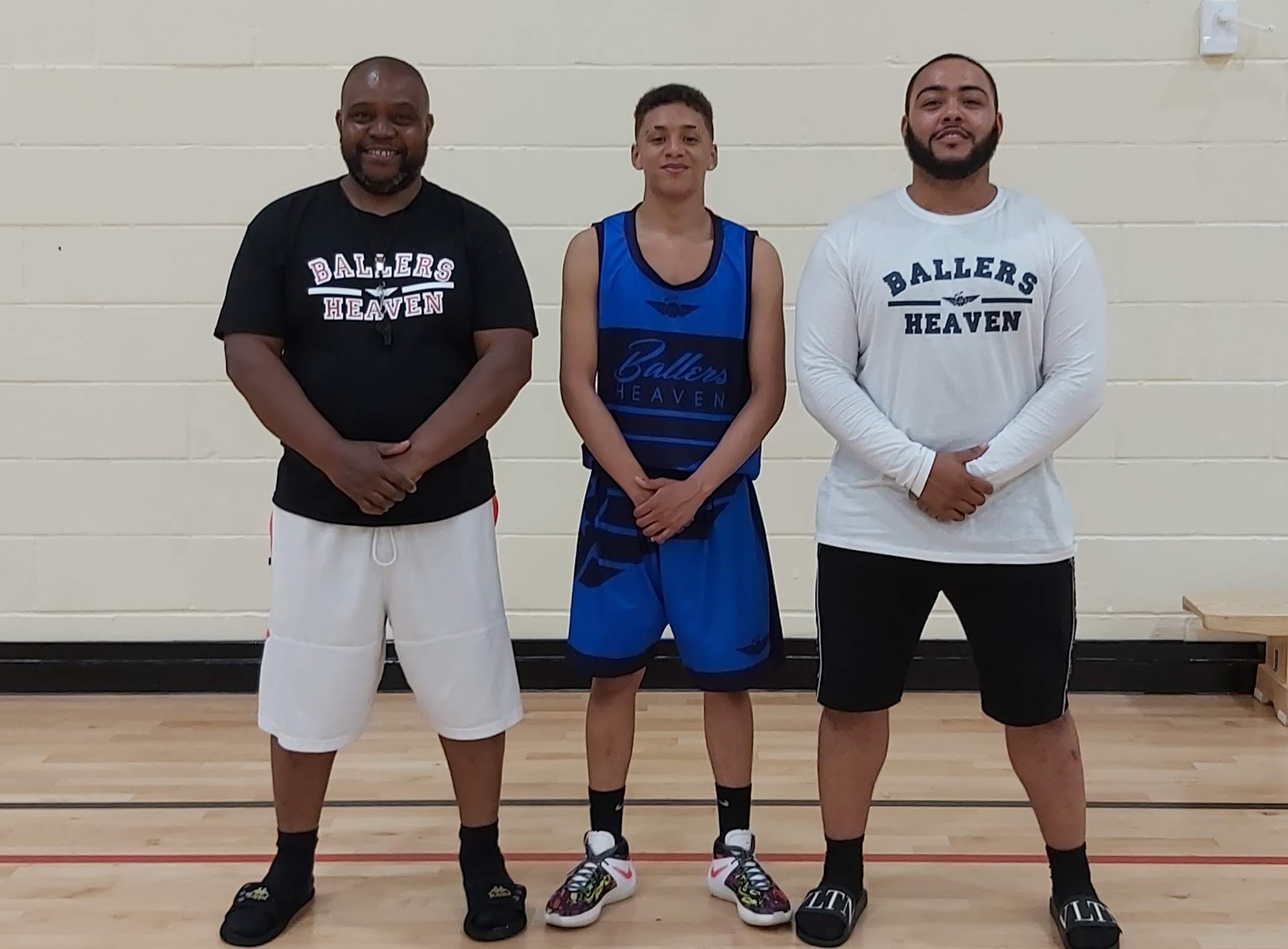 Ballers Heaven has made Tyrese Lacey’s dreams come true, as the British standout guard heads to the United States of America.

Birmingham Elite point guard Tyrese is set to embark on this new amazing chapter of his young career as he will be leaving next month to the great state of Utah to play for state champions Layton Christian and charismatic coach Bobby Porter.